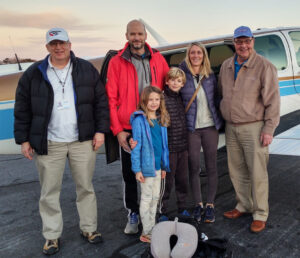 January 06, 2023—Compassion Airlift pilots Rick Moss and Dan Radtke graciously volunteered their time and resources to transport Matt and his wife, Aimee, from Easton, MD (ESN) to Greenville, SC (GMU) on the second half of an Angel Flight East mission that originated in Boston, MA. They were met at the airport by their excited young children and Matt’s father. Matt was in Boston for specialized treatment of a rare form of lung cancer. The pilots received a heartfelt thank you note from the family, “We want to thank you from the bottom of our hearts for your generosity…the help you and the service is providing really helps.” “After initial concerns for wind and icing conditions, it turned out to be a pretty nice day,” commented Rick. 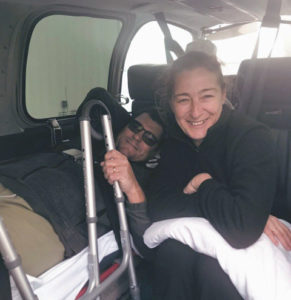 On March 22, 2019, Compassion Airlift pilots Mike Pearson and Chuck Van Nostrand, who generously donated their time and financial resources, began a three-day mission to transport Jim, a high school teacher and his wife Christel, from New York to their home near North Palm Beach, FL. Because of the length of the flight, the pilots pre-positioned in New York on the 22nd, flew the couple to Florida on the 23rd, and made the return flight to Manassas, VA on the 24th. The couple had been vacationing when Jim shattered his hip skiing. After his surgery, Jim couldn’t sit up for any period of time which meant a long car ride or commercial flight were out of the question. For several days after Jim was released from the hospital they desperately searched for a way home, an air ambulance was cost prohibitive. Finally, Jim and Christel were connected with Compassion Airlift through our partnership with PALS, an organization that arranges transportation for individuals who cannot afford or are unable to fly commercially. Because Compassion Airlift has the only single-engine aircraft in the eastern US with an FAA-approved stretcher system installed for patients who need to recline during flight, we were uniquely positioned to help—at no cost to the couple. Post-flight Christel said, “We are extremely thankful for [Mike’s] and Chuck’s help with this flight and we are happy to be home so Jim can start his recovery.”

Meet Seth and his Mom, Lori. Seth has been fighting the progressive genetic disease of Duchenne Muscular Dystrophy since his diagnosis at the tender age of 3 years. Lori has been his caretaker and cheerleader for his entire life. Seth is a vibrant engaging teenager with a quick wit and contagious sense of humor. The courage of this Mother/Son team is hard to miss. Lori explained that the form of muscular dystrophy that Seth inherited is very rare and there are only a few treatment centers in the United States. That’s why the family had to relocate to Lynchburg, VA, to be closer to treatment for Seth. Pilot Rick Moss and Mission Assistant Peggy Doyle flew this courageous duo to Cincinnati Children’s Hospital on October 23, 2017 for Seth’s regular treatments. They were delivered back home by pilots Mike Pearson and Bob McCamish. 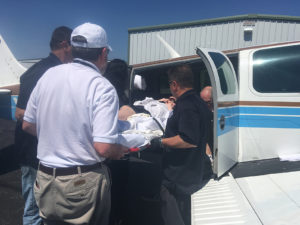 In July 2017, Compassion Airlift transported an 18-year old with Duchenne Muscular Dystrophy, from Shirley, New York on Long Island, to Martinsville, Virginia. His mother accompanied him on the flight. In lieu of a $20,000 air ambulance, a painful 12-hour car ride would have been the only option for transporting this young man if our stretcher equipped Bonanza had not been available. The city of Shirley furnished the ambulance transport to the airport. There was an ambulance standing by for the ground transport as we arrived in Martinsville.

Transported a 62-year old woman with Ehlers Danlos Syndrome from College Park to Richmond. Special clearances are required for a pilot to fly into the College Park airport, including a FBI background investigation.

Transported a 67-year old military veteran with pancreatitis from Franklin, NC, to Baltimore, MD, for hernia surgery. He also has hearing loss and neuropathy of legs. We transported him back to North Carolina after the surgery.

Transported a 58-year old man recovering from a stroke and on oxygen. We transported he and his wife from Norfolk, VA to their home in Sevierville, TN.

Transported a 17-year old man recovering from bile duct and gallbladder injury. We transported him from Pittsburgh, PA, to Charleston, WV.

Orange County, VA to Ocean County, NJ, en route to Boston Shriners Hospital. Kaylee is a 6-year old girl with severe burns over her entire body. Discussion with her father revealed that she was not burned externally in a fire, but rather the burned flesh resulted from a chemical imbalance within her body. Despite her burns, she was a lively, sharp, alert, and delightful little girl with a winning smile. She has made over ten trips with Angel Flight for specialized treatment at the Burn Center at Boston Shriner’s Hospital, and expects to make many more trips.

Transported a 27-year old woman with sacral chordoma from Baltimore to Boston.

Laverne asked that her non-ambulatory 37-year old daughter be transported from a medical facility in Dayton, OH to a facility near her home in Allentown, PA. We were able to provide the service on October 26, 2015. Laverne was thrilled that we were able to help her daughter. The alternative would have been an eight-hour ambulance transport. Her daughter, mother of a 5- and a 12- year old, was declared to be brain dead after a terrible automobile accident five years ago. She has defied the doctors and is living without life-support assistance. Laverne and her grandchildren are hopeful that Aesha will recover so that she can again be with her family. 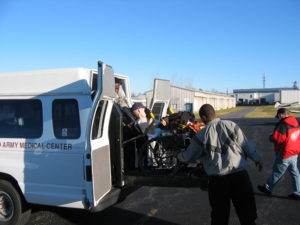 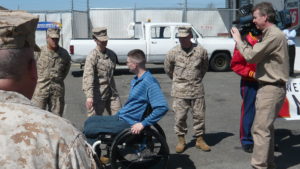 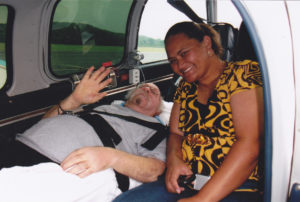 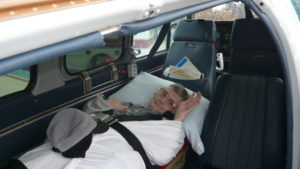 Our Bonanza is the only single-engine aircraft in the eastern US with a FAA-approved stretcher system installed for patients who need to recline during flight—especially veterans who have lost limbs due to combat-related injuries. 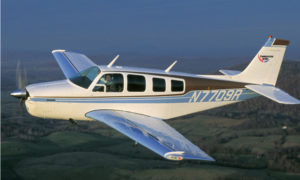